Happy Birthday honey! 🙂 I bought her the K-PAX Trilogy to read and we’re going out to Bella Pasta tonight for a nice meal, which I’m really looking forward to. I just hope I can hold the fork after cutting my hand earlier! 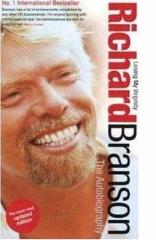 Just finished reading Richard Branson’s Autobiography. Its a detailed account of his life from early childhood right up to late 2005. I really enjoyed the book, especially the accounts of his balloon trips around the world. This guy really has lived life to the fullest, but has risked it all on numerous occasions (nearly being killed on his balloon trips and being on the brink of financial ruin time after time). I have to admire his determination for success, but the main thing I realised from the book is that he’s actually a genuinely nice bloke. It was interesting reading about BA’s “nasty trick’s” campaign against him and Virgin Atlantic, about CocaCola’s evil antics to stomp out Virgin Cola, and also about all the charitable stuff he did during the Gulf war. There’s stuff in there about Camelot and the National Lottery takeover bid, and the full story of how Virgin Music got started (with Mike Oldfield). A real eye-opener and inspiring account of his life and the Virgin empire – definitely worth a read!